EECS 388 uses Docker to simplify setup and maintain a common working environment across a wide variety of student machines. Projects 1, 2, and 3 distribute development containers with all necessary tools included to complete the projects pre-installed, and Projects 2, 3, and 5 also distribute GUI applications for use through Docker.

With Docker, there is no more time spent configuring your environment—simply clone the starter files, press a button in Visual Studio Code, and you’re up and coding.

Docker is a container framework, allowing the running of tiny versions of operating systems and tools in an isolated environment on your machine. Docker produces containers from images, which are exact “recipes” for building a container, allowing (more or less) the exact same environment, or container, to be produced on any computer. Docker is widely used in industry—you might imagine that being able to easily produce the exact same environment for an application on any computer would be a desirable trait—and you might also imagine that it would be desirable to EECS 388 for the same reason!

When you run an image in Docker, it first uses that “recipe” to get some background information about what operating system it should be running in (the “base” image; this doesn’t necessarily have to be an operating system, but it often is). It then starts up a container, which is similar to a virtual machine, but much smaller (it shares the “kernel,” or basic operating system functions, with the host to decrease resource usage like CPU, memory, and disk space), to safely isolate the code in the container from your computer, and begins carrying out the instructions of the image to produce the final container. The result is what seems like a smaller computer running within your own, possibly on a completely different operating system, but without many of the annoyances of virtual machines. (On macOS and some Windows hosts, a virtual machine actually is being run, but this is done transparently by Docker and requires no management from the user.)

This system allows us to include the tools you’ll need for each project in an image, after which a container will be built on your machine with the exact same versions of all the tools that we expect you to be using, with no setup on your part! Even better, Visual Studio Code integrates extremely well with Docker, meaning that VS Code can be run within this Docker container, sharing all of your project files with where they exist on your computer, and allowing you to hardly notice that you’re coding in a container at all. This even works for host machines running an Arm processor—for students with an M1 Mac, the process will work exactly the same for you, including the same tools!

The first step in using Docker is installing it. Navigate to the Docker Desktop download page, and download the file corresponding to your current machine (the “host” machine)’s operating system. For macOS users, it is a typical .dmg installer, and for Windows users, an .exe installer is included that performs the installation process. For Linux users, Docker provides packages for multiple distributions; more information is included in their guides. (We do assume some Linux knowledge for students who choose to maintain a Linux host in this guide, but if you’re having any difficulties, feel free to reach out to us.)

For students with a Windows host machine, the WSL 2 integration allows Docker to be controlled from within WSL 2; this works quite well if you’re used to the existing WSL 2 remote workflow in VS Code!

After installing Docker, you should be able to run its hello-world image to verify that your installation is working correctly:

As the note explains, Docker just did a lot behind the scenes! If you see a similar message, congrats—you are fully ready to go to start on Project 1!

After installing Docker and cloning the Project 1 starter files, search for and install the “Remote - Containers” extension in the VS Code marketplace:

After installing this extension, you may receive a pop-up message to open the current project in a container; if not, open the Command Pallette (CTRL+SHIFT+P on Windows/Linux; ⌘+⇧+P on macOS), then type “reopen in container” and select the command:

Your VS Code window will close and reopen, and the first time you do this, it may take a few minutes to build the container; its status can be followed in the bottom right of the window. After this finishes, you’ll be greeted with a relatively normal-looking VS Code window, with an exception—looking at the bottom left of the window, you should notice that your environment has changed to “Dev Container”:

Congrats—that was it; you’re now working within the container! If we open up a terminal in the window, we can further see that we’re in the container: 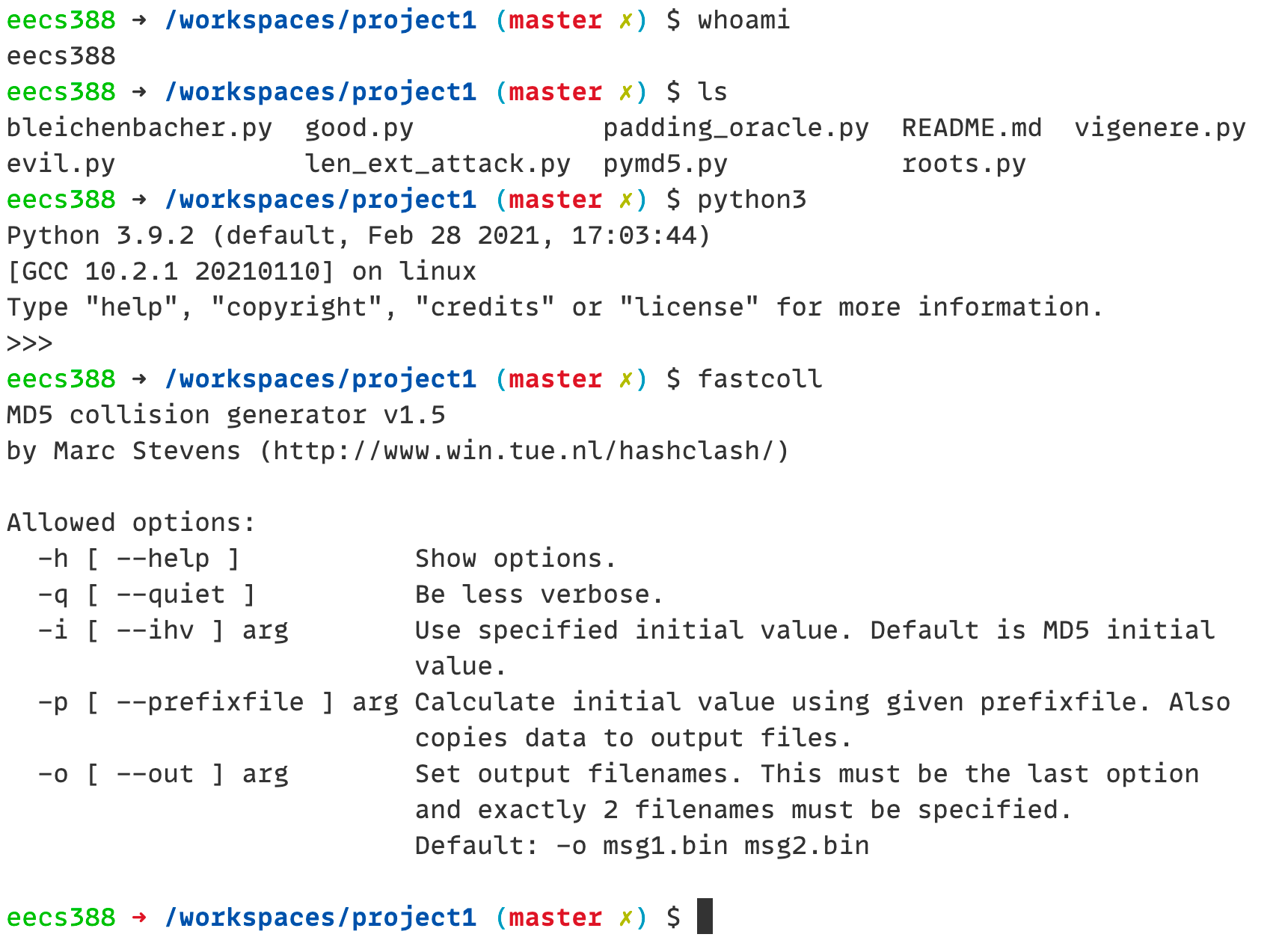 In addition to editing files and using a terminal in the container, VS Code also supports debugging code in the container out of the box. We have provided starter launch.json files for projects where debugging using an IDE makes sense; you might need to fill in a few values to get started, but after that, debugging your code will work just like you may have done in EECS 280 or 281.

While we have included everything necessary for each project, as well as some niceties like Git, curl, GCC, jq, and others in each project’s container, we know that there might be some specific tool that you use in your development workflow that we’re missing. Unfortunately, because containers are built from an exact image, any changes you make to the system from within the container may be lost at any time. Luckily, you can still customize the image, and thus the container, further! In each project’s starter files, you’ll find a .devcontainer folder containing a Dockerfile; here, you can see that we use a base image of eecs388/projectN, but also give you room to add your own statements. You can run commands in the container with RUN; for example, if we wanted to install Emacs inside the container (are you reading this, Professor DeOrio?), we could add the following line:

As you might have been able to guess from this line, the base image used by all of our development containers is Ubuntu Linux. The update is necessary as Docker doesn’t save some ephemeral files in order to save space; package lists are one such example.

For each project, we will also include guidance for things we do NOT want you to do in the Dockerfile—for example, in Project 1, we note that you should not be installing any additional Python modules via pip, as you will only have access to the modules which we’ve already installed when your code is being graded. Customization allows you to install some additional niceties in the container, but it does not affect the environment in which your code is graded—keep that in mind.